Kevin Fett, one of the owners of Evo Exhibits in Chicago, passed along this video of the Sacagawea Portable Hybrid Display. We liked it so much, we wanted to give you a chance to see it too. It’s a good mix of time lapse assembly and a soft sales pitch on the features and benefits of this portable system.

According to Kevin, “Thought I’d share a video of Susan Johnson putting up a Sacagawea in time lapse.  Susan is 5’0″ — so we thought it would be cool to see her put one up by herself.”

You Don't Need No Stinking Pop Up!

You’re at a trade show holding a fistful of qualified leads. It’s the last day, the last 10 minutes before the show closes and you’re tired. You’re ready for dinner, a drink, and a quiet, relaxing evening.  But first, you have to dismantle and pack your 10 ft. display.

No problem. You have a SEGUE Sunrise.

Prices start at $2575 retail for an upscale, portable hybrid display. Best of all . . . It’s manufactured by Classic Exhibits, the leader in portable/modular hybrid displays.

See all the SEGUE Sunrise Displays in Exhibit Design Search, the world’s largest database of exhibits and accessories.

The Future of Trade Shows

After ten plus years in the exhibit industry, I tend to make assumptions about trade shows. To me, they are convention halls, pipe and drape, carpeting, hanging banners, and trade show displays. They are drayage, union labor, and confusing electrical forms. You expect the typical exhibit hall to be 50 percent “show” and 50 percent “trade” once the doors open.

Admittedly, my perception is a bit skewed. I work for a portable, modular, and custom-hybrid exhibit manufacturer, and tend to see every show as a healthy dose of our designs with a smattering of custom exhibits and a sprinkling of banner stands. Those are trade shows, all set within a large exposition hall. That said . . .  I’m not naïve. I know a typical arts and crafts fair, Chamber of Commerce show, or local health fair doesn’t have all the pomp and circumstance of a traditional trade show. However, even those shows have professional table top displays, pop ups, and banner stands. I have always believed (and preached) that if you want your show to be successful, you should follow the advice of industry experts.

No Carpeting, No Pipe and Drape, No Drayage

Two weeks ago, I discovered otherwise. I learned, through personal experience, that you can hold a successful show without carpeting, without hanging banners, and largely without professional displays. People will come if the event speaks to their hobby or their lifestyle. And, in many situations, a more casual approach may give the event more credibility – especially in the beginning.

About three months ago, I volunteered to assist with a local vegan/vegetarian festival, called the Portland VegFest 2009. This isn’t a new event. In fact, this year marks the 5th year, but this was the first year the VegFest was to be held in the Oregon Convention Center. The previous events were held in a local high school cafeteria. As the newbie on the planning committee, I quickly learned that the committee was well-organized, professional, and knowledgeable, but that the event had little money for the normal bells and whistles of a trade show. There would be no carpeting or hanging banners. Signage would be minimal, and even the printing of the black and white program was held to 1500 copies.

END_OF_DOCUMENT_TOKEN_TO_BE_REPLACED

What You Should Know as a First-Time Exhibit Buyer
September 20th, 2009 Mel White COMMENTS 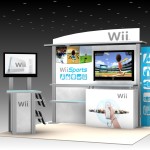 How to Get Started

Chances are you’ll purchase your exhibit from a local exhibit company. Exhibit companies have been around for decades and understand exhibits and trade shows. Originally, exhibits were custom-crafted. Then exhibit systems evolved as an alternative to the high cost of custom craftsmanship. Now, there are multiple exhibit categories. Exhibit systems, which includes portable, modular, and hybrid exhibits, are evolving towards custom-crafted exhibits, and custom-crafted exhibits are evolving towards exhibit systems. Both have distinct advantages and exhibit companies work hard to carve out distinct niches along the custom to portable spectrum. The exhibit (or exhibits) that best fits your company’s exhibit marketing strategy will slot in somewhere along this spectrum. This is where an exhibit consultant can be very useful. Ultimately, an exhibit consultant wants to help you maximize your exhibit marketing potential.
END_OF_DOCUMENT_TOKEN_TO_BE_REPLACED

Exhibitors are from Mars . . . Show Services are from Venus

As we all know, the current economic situation in the US and around the world has been the primary focus in the news over the past year. Is it an economic downturn? I don’t care what economists want to label it . . . It’s a freaking recession folks! Whether you want to blame the new guy or the old guy or just some guy named “Guy,” we are in it together. Or are we?

Over the past couple of years, whether it’s because of the sustainable green exhibit movement, the economy, or whatever, as an industry we have embraced new products and processes that have resulted in cost savings for our clients. We started using more LED technology which cuts down on the electrical bill at the show. We have adopted different packaging methods, such as single shippers, that allow you to send components more “pre”-assembled for faster setup and tear down and thus a lower labor bill. And we have incorporated new lightweight materials and exhibit options which have lowered freight and drayage bills.

These are all changes that Custom Exhibit Builders, Portable, Modular, and Custom-Hybrid Display Builders, and certainly our customers have adopted happily.

This week, while assisting on several new projects leaving for shows, I was reminded that we do not all share the same goals for the trade show industry. It’s pretty clear that improving the trade show experience is not as high a priority for some as it is for others.