I just returned home from the Randy Smith Memorial Golf Classic in Atlanta, an event presented by EDPA and E2MA. As many of you know, Kevin has been attending this event for many years. This was my third trip, and this year I filled in for Kevin who couldn’t attend. I golfed with Reid Sherwood, Cindi Cody, and Bill Glasser, and we had a great time.

It’s difficult to put into words just how important this event is to our industry, and how much it means to the recipients that benefit from it. It’s always fun to get together with friends, customers, and suppliers. And the golf couldn’t have been better with the incredible weather we had. And to witness Reid Sherwood putting an 80 and 40 foot putt for two eagles was amazing! It will be interesting to hear Reid tell the story. We’ll see if the 80 footer turns into 120, and if the 40 footer turns into 75, but regardless, they were incredible putts, and highlights of our round.

The fun, however, is no match for the feeling that comes from being a part of something so meaningful. This event proves that there really is such a thing as friendly competition. We all come together as one family with one common goal:  to help the people within our industry who have suffered severe tragedies or face insurmountable medical expenses. These are people just like us that are sitting in an office next door, or working in the shop or the warehouse, or on the show floor–that are suddenly hit with tragic, life-changing circumstances in their lives. 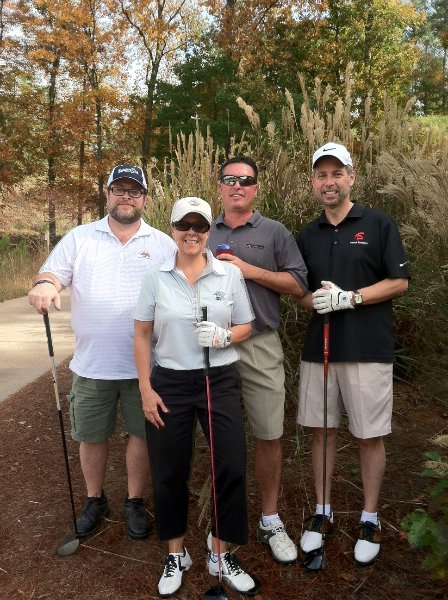 The banquet that is held after the golf tournament is truly touching as you listen to heart-wrenching stories from the recipients. Stories that are unimaginable to a lot of us, and way too close to home for others.

It’s a sobering reminder that life throws unexpected curves at us, and that our circumstances can change in an instant.

I can’t speak for others who attended this year, or for those who attended in the past, but I can tell you that when I arrived back home in Portland, I was more thankful than ever to to hug my healthy wife and four year old daughter, and to know that they’re okay. Unfortunately, we have people in our industry (our family) who can’t say that. All of us here at Classic know this too well. Our Director of Design, Mike Swartout, who was a recipient at last year’s Randy Smith, is battling Stage 4 prostate cancer.

I’d like to say a special thank you to Rich Johnson and all of the volunteers for their incredible commitment and work with this tournament every year!

The tournament is a lot of fun, and worth the trip in itself. But the real gratification comes from being a part of something that means so much to the recipients who know and appreciate so deeply that we’re helping to support them during their time of hardship and tragedy in their lives.

If you haven’t attended, please consider it for next year.  You’ll be glad you did. 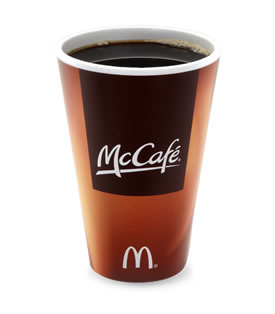 The 58th Annual EDPA ACCESS conference full agenda has been released! Join your peers at the only executive conference for designers, builders and suppliers of exhibits and experiences for three days of learning, networking and growth.

This year’s agenda includes an exciting line-up of speakers and presenters who will be bringing you up-to date topics, the latest trends and best practices for evolving and growing your business in the exhibition and experience industry. 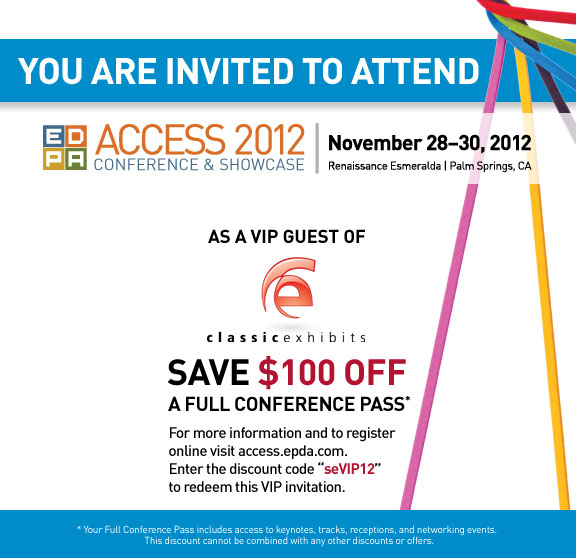 Three different tracks at this year’s conference are action packed with great content! The International Track will focus on France, this year’s featured country, while ‘Down to Business’ and ‘Connect and Create’ will keep you current on best practices and growth opportunities in 2013!

In addition to top-notch sessions, we will also be bringing some great networking opportunities! Make the most out of your experience at ACCESS 2012 by meeting your peers at the many events and receptions that we have planned.