EXHIBITOR Magazine announced the finalists for the 2018 Portable Modular Awards this week. They also launched the People’s Choice Voting website where you can vote once a day for your favorite design (regardless of the category). 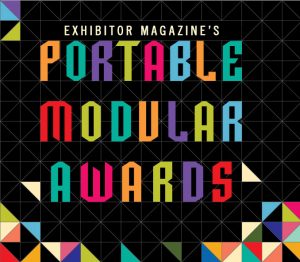 Classic Exhibits has been an active supporter of the PMA since its inception five years ago, both through submissions and advertising. This year is no exception. We submitted five entries, and four were accepted as finalists.

Design/Marketing Challenge:  Parallon wanted an exhibit that made a big impression with attendees from across the show hall and in the booth space. They requested an open concept allowing for a natural flow of traffic through the booth and multiple conversation areas. In addition, the modular components had to fit different size footprints. Equally important was the use of technology and integrated lighting throughout the design. One big challenge was Parallon’s requirement to easily re-brand the booth for their strategic partner HealthTrust, which uses the structural components of this booth at shows where Parallon does not exhibit. Finally, the client wanted to improve their operational cost savings compared to their previous booth.

Design/Marketing Challenge: ForRent.com wanted a substantial presence on the show floor with cohesive branding for all their divisions. They decided to feature all their sub-brands in their booth for the first time:  ForRentUniversity.com, ForRent.com, CorporateHousing.com and After55.com. With 30 working employees in their booth, they needed a large amount of secured storage, lots of interactive demo areas for 1-on-1 sales, social media activity, and both in-depth and casual meeting spaces for building relationships with customers. The materials needed to have a residential feel to focus attention on their residential properties. Finally, they wanted more design flexibility while achieving their goals which is why they choose a 20 x 50 rental (rather than a typical purchase). 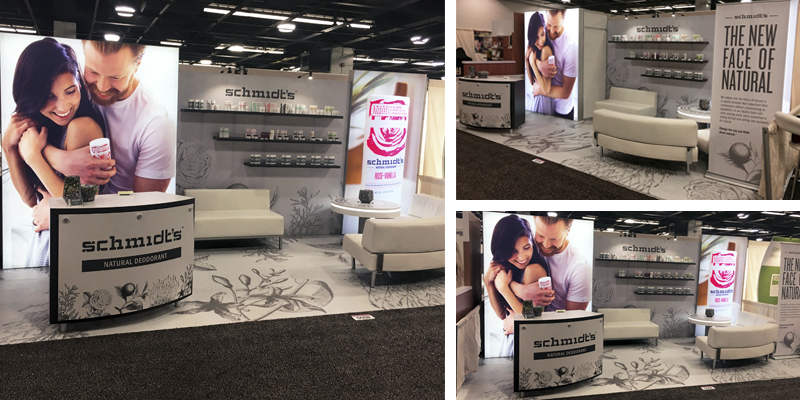 Design/Marketing Challenge:  Schmidt’s Naturals wanted the natural and clean qualities of their well-established brand to be reflected in their booth. They wanted a clean product display area, storage, space for casual meetings, and an overall inviting feel. The space also needed well-organized sampling areas where visitors could smell the products. 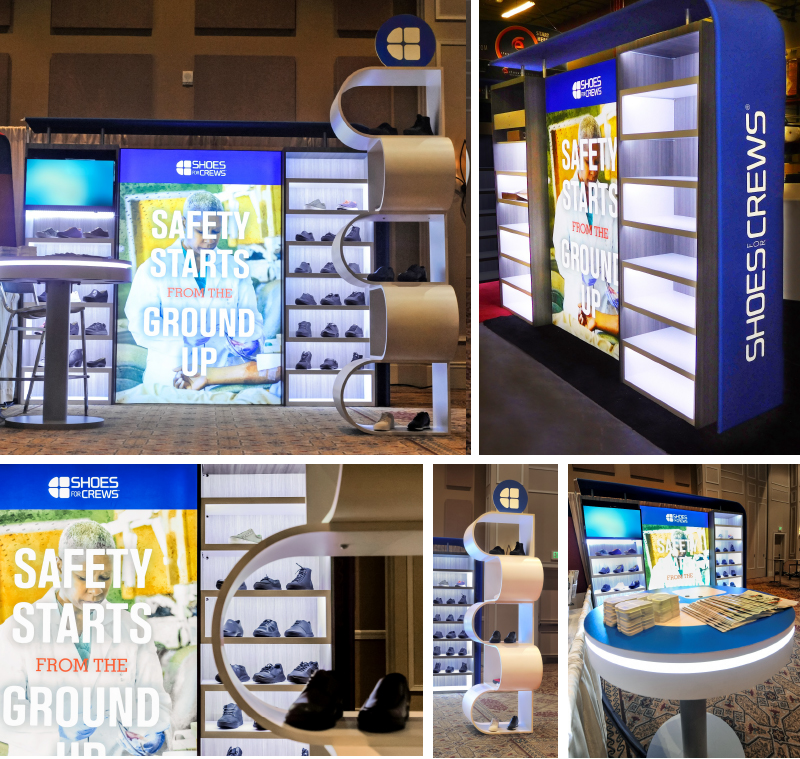 Design/Marketing Challenge:  Shoes For Crews wanted their trade show displays to reflect their recent updated branding. The company participates in about 70 shows per year with various booth sizes, so they needed a distinctive, lightweight, reconfigurable, well-lit exhibit with enough shelving to show 40-50 shoes representing all their product lines. They didn’t want typical shelving;  they wanted their shoes displayed in a creative fashion. Also they hoped to engage customers in their booth space with media, recreating a breakroom experience that their customers experience in their respective environments.

We encourage you to vote for your favorite(s) over the next three months. Let us know if you have any questions, and we would enjoy hearing your comments about the four finalists. Finally a HUGE thanks to the Classic Distributors for their support with PMA and to Katina Rigall Zipay, our Creative Director, for submitting the entries.

Winners will be announced at EXHIBITORLIVE.

Beginning in mid-July, Classic Exhibits and ClassicMODUL will run a series of banner ads in the ExhibitorOnline weekly e-broadcast. Most of you receive this email every Thursday or Friday from EXHIBITOR Magazine.

We’ll showcase a new banner ad each week (for 18 weeks). We decided to mimic the Urban Dictionary, but with exhibit industry terms and definitions. We call it the Urban Exhibitionary. To prime the pump, we reached out to some industry friends for ideas, and some of their clever definitions are listed below, but this is merely the first step to creating a comprehensive exhibit dictionary. We want your witty ideas and would love to use the best ones in the ads.

Here are some of the more interesting ones so far.

Blink: Special effects lighting that’s often used to compensate for a not-so-great display. Blink rules the dance floor, but isn’t quite as flashy as its rapper cousin, Bling.

That company’s got so much Blink on display, I couldn’t even read their sign.

Masterwaiting: Realizing you’re going to have to “go it alone” on the big presentation when your boss is delayed.

Please check on the flight status for Mr. K’s arrival, I’m in the hallway just Masterwaiting and the customer looks pretty anxious.

TTWN: Too Tired for Wednesday Night.

I know it’s the last night of EXHIBITOR, but I’m TTWN.

At 300 lbs., that display goes in the Port-not-able Hall of Shame.

Trade shows will always be the place to be seen. It’s impossible to close the deal when you’re working Face-to-Space.

Assertain: When someone wastes your time with small talk or jokes instead of providing factual information about pricing or warranty. Often used as a tactic to stall. (Alt.) Slang: What happens when an unlikable person attempts to entertain.

It took me two weeks to get the pricing info I requested, but the sales dude called everyday just to assertain me. (Alt.) Slang: He may think he’s an Elvis impersonator, but it’s really just assertainment.

Trinketeer: A show attendee whose primary focus is to gather as many trinkets and trash as possible. No giveaway item is too small or insignificant for this exhibit hall swashbuckler!

Did you see the two Trinketeers fighting over the last promotional Stress Ball at Booth 2234?

Arch-ritis: The pain from wearing new shoes at a trade show.

I told Sally not to wear those new pumps. Now, she’s got a serious case of arch-ritis.

You need to move away from me Jack, or I’ll be hammered by noon from your CuervoSweat fumes.

Booth Zombie: The comatose exhibitor who doesn’t like to talk to strangers, make eye contact, or stand for seven hours straight.

The Booth Zombie sat behind the table and stared blindly away from attendees, stopping only to check her emails, file her nails, and drink coffee.

Annie-halled:  The realization that you’ve been abandoned (orphaned) in the exhibit hall while dismantling your display.

I was tearing down the exhibit when I realized I’d been annie-halled by my co-workers. Leapin’ lizards!

I knew I’d been ban-boozled when the directions were sturdier than the banner stand.

Guttastrophe: The SUDDEN realization at a trade show that eating and drinking too much while wearing last year’s belt size has consequences.

He was in the middle of a very large exhibit hall when the telltale signs of a major Guttastrophe were upon him.

We’d love to include your terms in the Urban Exhibitionary. You’re a creative bunch. Post your terms and definitions. We’ll use the very best ones and collect the rest into a dictionary.

To those who attended EXHIBITOR in Las Vegas, I hope you had an enjoyable time.

This past month was a very exciting one at Classic. I am delighted to announce that March will be the second largest sales month in Classic Exhibits’ history! Thanks to you, our distributors and friends, for your support, your orders, and for believing in our “Shared Success” philosophy.

Since I did not attend EXHIBITOR this year, I hope you will share your feedback and reactions via the blog. The Classic Team had only positive comments about the show: great traffic, quality leads, and an overall upbeat tone.

As you may have noticed if you were at the show, Classic Exhibits, ClassicMODUL, and Exhibits NW were fortunate to have built not just our own booth but also several others on the show floor.

Here are just a few. Let us know what you thought of these designs:

Display Supply and Lighting (DS&L). This inline included Silicone Edge Graphic profiles from ClassicMODUL, SEG fabric graphics from Optima, and some truly amazing LED lighting from Display Supply. Check out the picture, but don’t miss the video. Great work to Rob Cohen and his team. And additional kudos to Steve Pinette for a stunning design.

EliteXPO. This inline had a very cool lounge theme. It included several ClassicMODUL profiles, large format Duratrans and tension fabric graphics from Optima Graphics as well as LED backlighting panels from Display Supply and Lighting. Kudos to Dave, Lara, and Chuck. I heard a lot of great feedback from attendees on your booth design and theme. Nicely done!

And special thanks to New Leads for allowing us to use their lead retrieval technology which runs off iPads. Very easy to use. 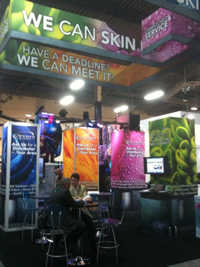 Optima Graphics Island. Not only was there a nice ClassicMODUL Tower in the booth, but did you see that Aero Hanging Sign structure?  Well done Jim, Dave, and the whole team at Optima.

EXHIBITOR Magazine. EXHIBITOR’s inline booth was a custom rental exhibit from Classic Rentals with a dynamic A/V presentation. The display demonstrated our flexible rental inventory and design capabilities. This was no kit. It was built using their design requirements for the show. 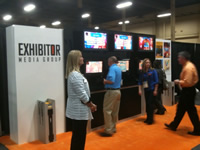 Classic Exhibits / Eco-systems Sustainable. And last but not least. I hope you enjoyed OUR booth: Your Home for Exhibits. Take a look at the pictures. What you might not know is that the structure is a Rental Exhibit! It highlights the true custom nature and capability of Jim Shelman and his whole crew at Classic Rentals / Exhibits NW. Thanks to Flying High Design for all the beautiful graphic work, to Optima for the printing, to Brumark for the carpeting, to Cort Furnishings for the comfy chairs and stools, to Nature Wall for the cool “real” grass wall in the ECO-Systems portion of the display. At the end of the day, that was probably the best overall design and display we have ever shown.

That being said, I want to say a personal thanks to Mel, Jim, James, Laura, Erik, Eric, Michael, Tim and of course Reid for their hard work last week. Not being there myself, I want you all to know how proud I am of our team and the job you did. Thanks!

Lastly, a huge thank you to our strategic partners:  Eco-systems Sustainable, Momentum Management, Cort, Optima Graphics, EliteXPO, and Display Supply and Lighting. Your guidance, generosity, and support made this year’s show particularly special.

Have a great and restful weekend.