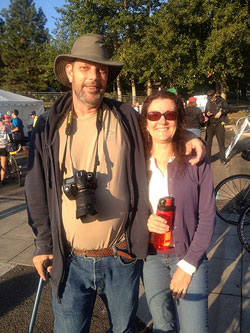 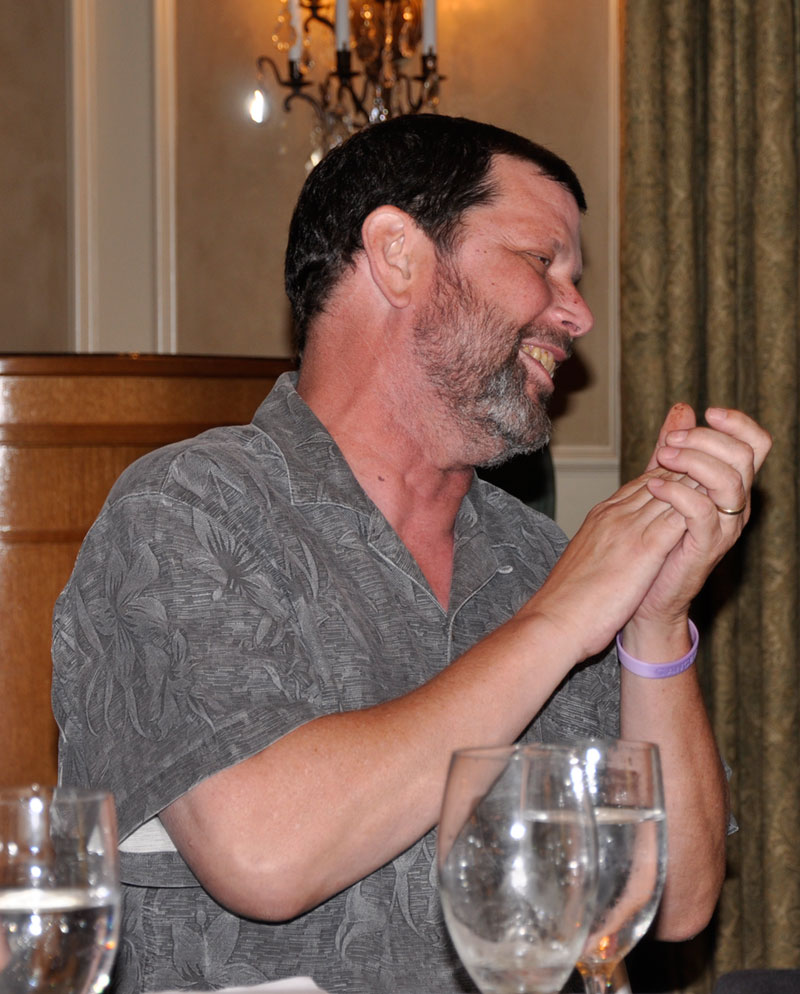 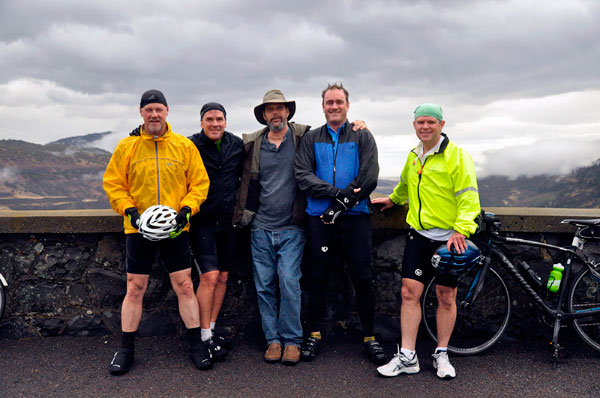 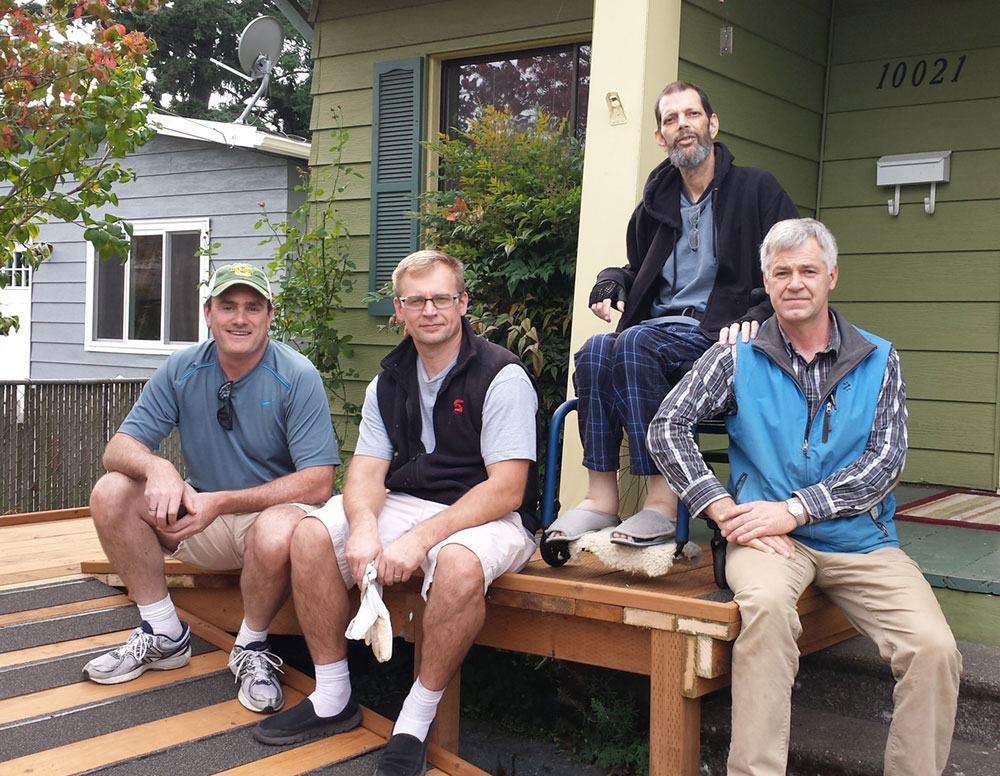 We love it when Classic Distributors think outside the box. Here’s a wonderful example. Start with the standard MOD-1432 Charging Table with (8) USB Ports and LED Perimeter Lights . Normally, the distributor would add a vinyl graphic to the counter top for branding. Which always looks terrific.

The Velocity Group decided to head in a different direction. They asked us to apply a whiteboard laminate to the counter top instead. At first glance, it looks like a ho-hum white surface. Not so. We’ve mocked up an example of doodles on the table so you can see how it might look on the show floor. Very smart idea! 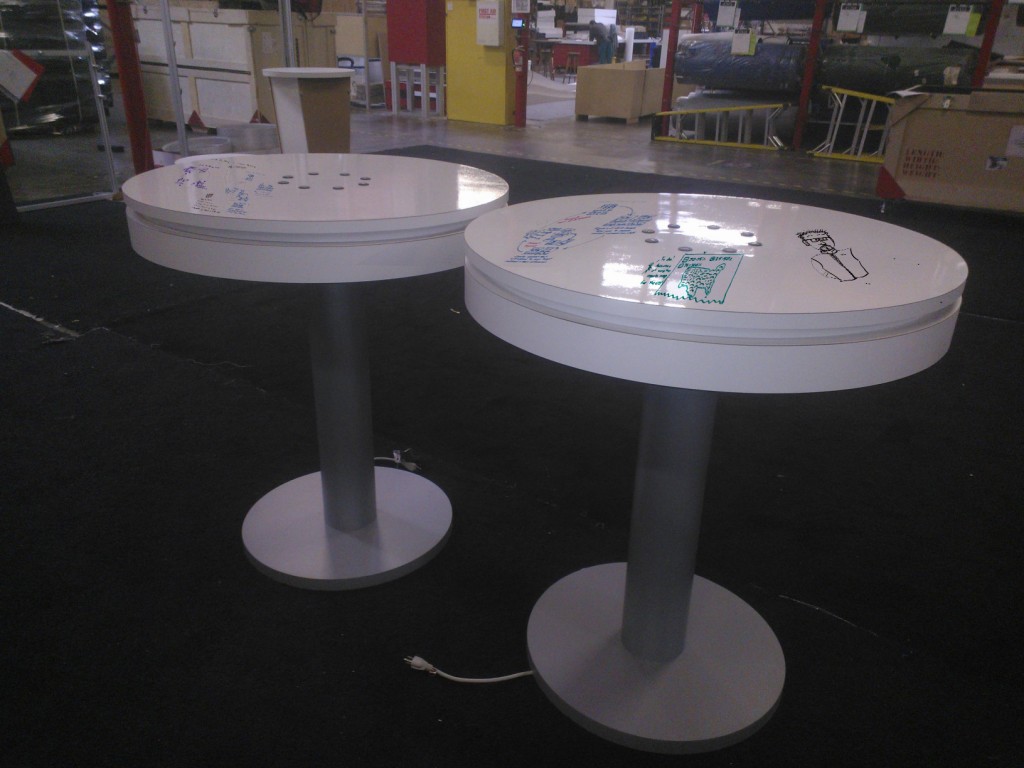 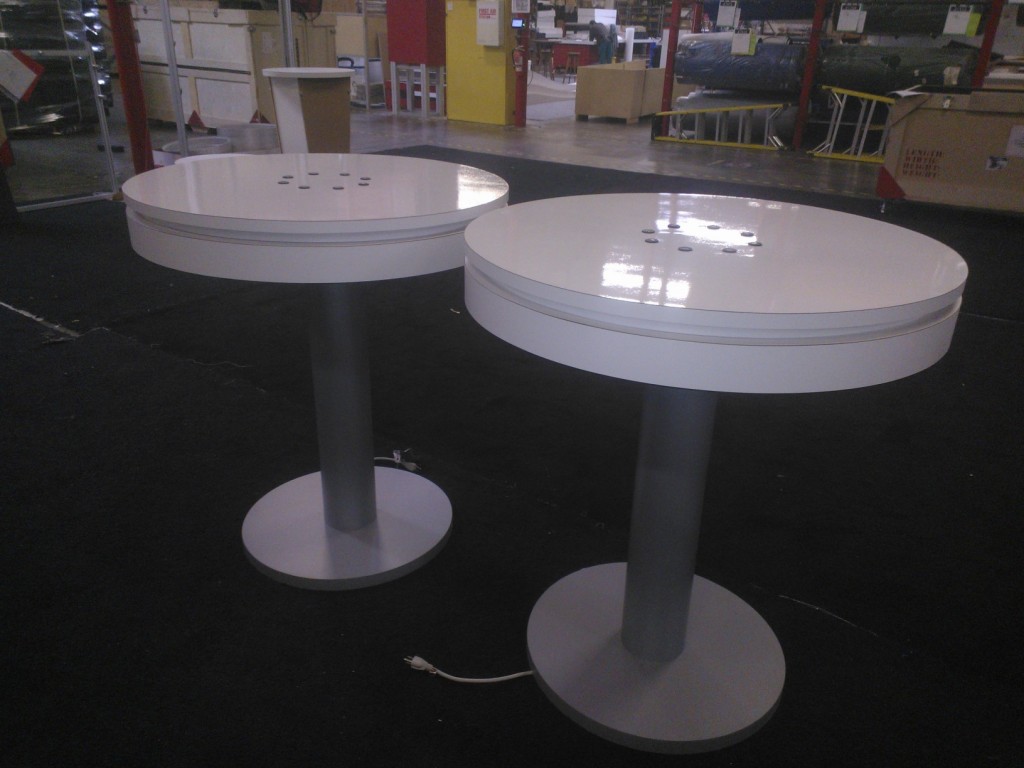 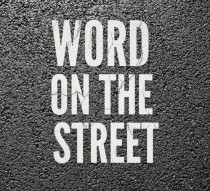 As a Classic Distributor, you know — or can probably guess — that the past two weeks have been nothing close to Bunnies and Bounce Houses around here. Why? Because our entire computer server/network came to a loud crash around April Fools Day.

But the joke was not a joke. It really happened. Our systems puked. And while we were able to recover our Accounting and CRM systems quickly, our email system struggled. Actually, our email flat-out died. And as you can all relate, there is never enough adult diapers in the room to prepare you for a total loss of information and connectivity. 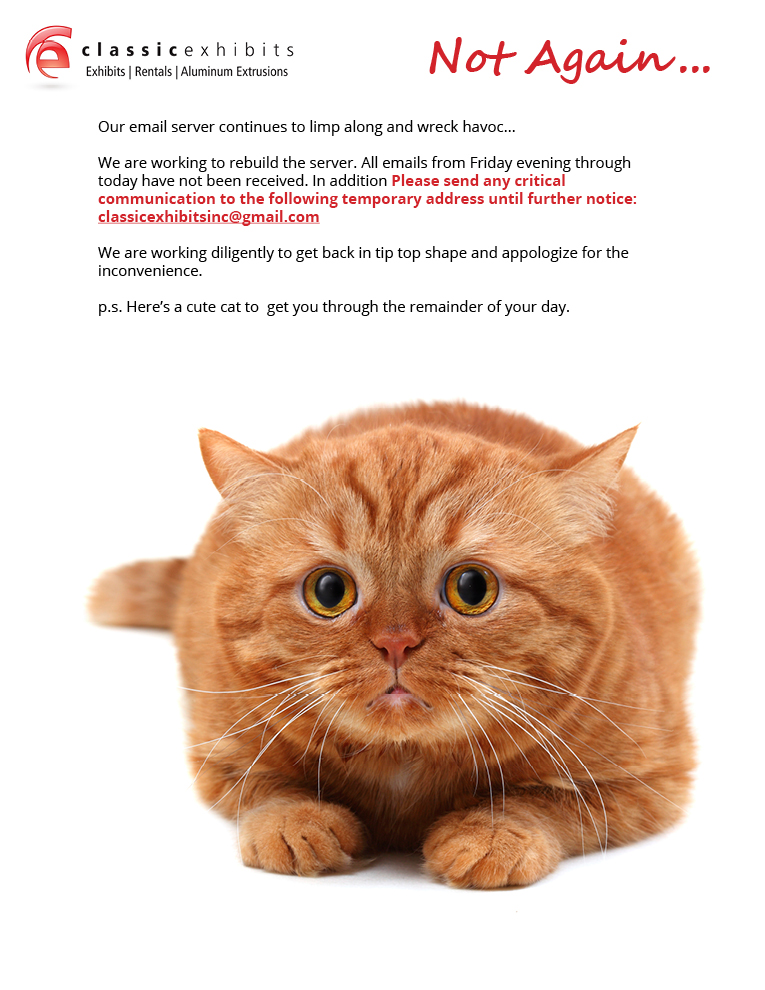 Well, the good news is that we have a solid disaster back-up plan that enabled us to recover all but three days of email and communications. And along the way, through the implementation of various hotspot, working from home, and good old-fashioned handwriting solutions, we were able to press through the mess and complete orders and quotes. And through this painful email apocalypse, we implemented a significantly better solution for our network setup.

But man oh man. This couldn’t have happened at a worse time! It’s freaking April in the trade show industry! One of the three busiest months of the year for us historically. This year is no exception. But again, we are looking to the future now, and I’m not going to dwell on the evenings that I set my alarm to go off once every 90 minutes to check in with the IT folks to see how the recovery was going and answer questions that they had along the way. NOPE, not going to focus on that at all. 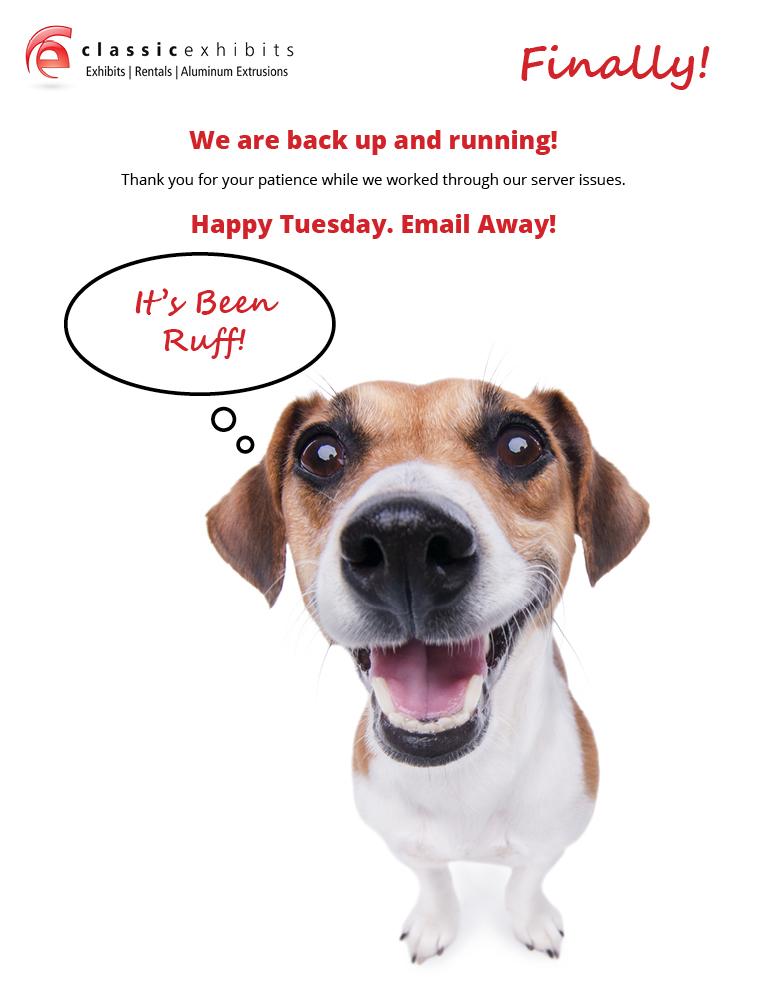 We are officially a cloud-based communications business as of last Monday. Our Accounting, Purchasing, and Order Entry software will stay on local servers at Classic. But all our emails are now cloud-based, and we have implemented a better protocol for email, storage, etc.

So, our apologies and our thanks to you, our wonderful customers, for your patience over the past two plus weeks. I honestly did not get one complaint. Which was appreciated. And if you had complained, I would have probably left you a burning bag of poo on your doorstep. What can I say. I was a little moody. 🙂

And thanks to our staff for their patience. Once again, I am proud and impressed by your professionalism and perseverance.

So, back to work on our fancy and now very speedy and reliable network.

Hope you have a great weekend with your families. I know I will… finally!

Last year, TS Crew created 28 Strangers That Touch Your Trade Show Exhibit. It’s an excellent infographic because it shows graphically how many people “touch” your exhibit from the moment it leaves your exhibit builder’s dock. Simply start in the upper right-hand corner.

Now, realistically, a lot more folks handle your booth than shown, including the I&D team, but you get the point. Our thanks to TS Crew, an Exhibitor-Appointed Contractor, for allowing us to share this.  And yes, “that” should be “who,” but take a deep breath, move on, and enjoy the infographic. 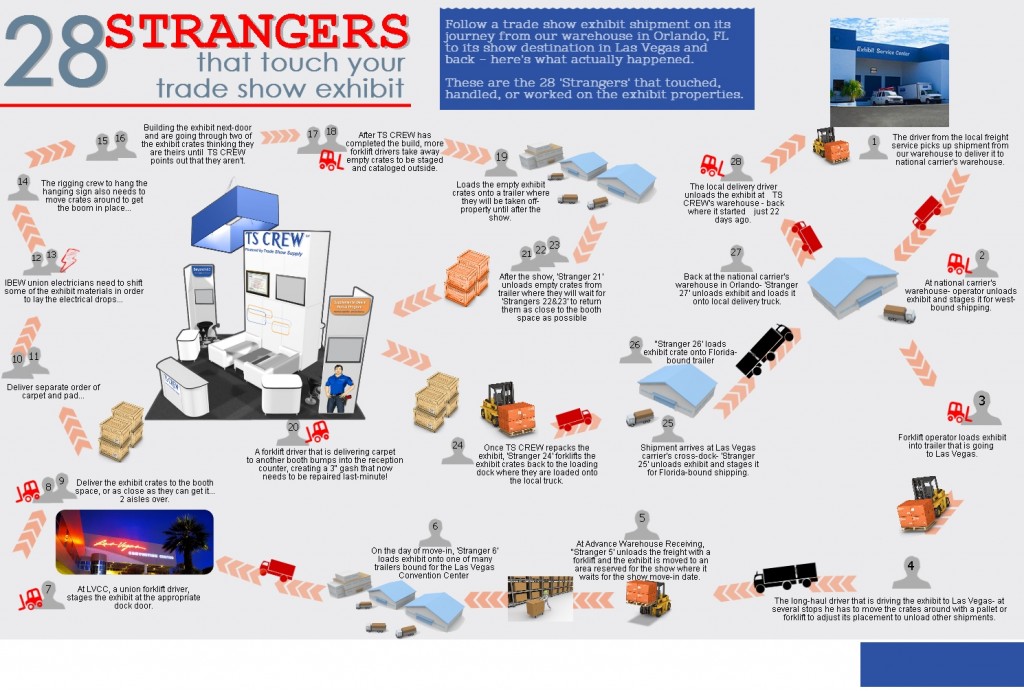 We all have our comfortable work routines, particularly in the morning. For me, there’s the mandatory cup of black tea and reading Seth Godin’s daily post. His ability to communicate timely, relevant advice in an engaging and digestible email is always inspirational.

A couple of weeks ago, he wrote Show Your Work, and I’ve found myself revisiting it again and again. I suspect that you struggle, as do we, with the challenge of perfection vs. good enough. How much longer do you finesse the design? When are the setup instructions clear and logical? Is the packaging more than sufficient but perhaps not a “work of art”? At some point, it’s time. You need to hear from your customers.

Over the years, we’ve learned that it’s OK to “release” if you’ve done your best under the circumstances. The mistake is not listening to feedback and making adjustments. And honestly, that can be so much harder for people and organizations because then it’s no longer about perfection. It’s about ego. I’ll spare you my rant about ego in the workplace. That’s a separate (and much longer) rant.

Anyway… Seth says it so much better than me. Enjoy. 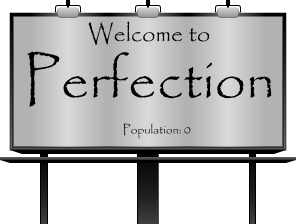 It’s tempting to sit in the corner and then, voila, to amaze us all with your perfect answer.

But of course, that’s not what ever works.

What works is evolving in public, with the team. Showing your work. Thinking out loud. Failing on the way to succeeding, imperfecting on your way to better than good enough.

Do people want to be stuck with the first version of the iPhone, the Ford, the Chanel dress? Do they want to read the first draft of that novel, see the rough cut of that film? Of course not.

Ship before you’re ready, because you will never be ready. Ready implies you know it’s going to work, and you can’t know that. You should ship when you’re prepared, when it’s time to show your work, but not a minute later.

Polish with your peers, your true fans, the market. Because when we polish together, we make better work.