Ten “Guaranteed” Techniques to Get Traffic to Your Booth

“What Can I Do to Increase Traffic to My Booth?”

I get asked this a lot. I explain the importance of selecting the right show, meticulous pre-show planning, careful graphic messaging, and booth sales training. They nod and say “Yes,” “Uh huh,” “OK,”  and “Of course!” But I’m no fool. I can hear their disappointment and reluctance. All that takes time, energy, planning, and a dash of creativity. In other words, it’s too much work.

So let’s try another approach. I asked my wife, Christine, the same question. Christine is a brilliant and creative woman who’s both an academic and a pop culture fan. She knows nothing about trade shows despite my working in the industry for 15 years and sharing my successes and sorrows nearly every night (but that’s a different blog post). I asked her what it would take, assuming she’s already at a trade show, to entice her to visit an exhibitor. Here are her Top 10 suggestions in reverse order. Enjoy!

10.)  Zombies vs. Unicorns:  In the new collection of short stories, Zombies vs. Unicorns, authors Holly Black and Justine Larbalestier explore which of the two title creatures rule. I would like to see a booth in which zombies and unicorns do engage in battle. Real zombies. Real unicorns.

9.)  Jet Pack:  I am still waiting for my jet pack, promised to me in science films we watched in elementary school in the 1960s. I would definitely wait in line to get to a booth that was giving away jet packs.

8.)  Universal Translator:  And speaking of science, I think those Star Trek implants that allow the wearer to perfectly understand all other languages are really cool. A booth could raffle a few of those off. 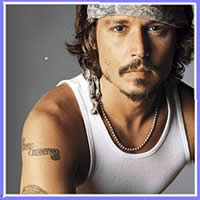 7.)  Johnny Depp:  All women like Johnny Depp. But a divorced Johnny Depp who is actually interested in women from his own age group? A trade show exhibitor should really do this.

6.)  Clones:  Like most people these days, I cannot find enough time in the day to do everything I need/want to do. A cloning machine to create multiple me’s to get stuff done would be pretty awesome.

5.)  Chocolate Exhibit:  Exhibitors could take a tip from Willy Wonka:  a booth made of non-fat but tasty chocolate, and booth-goers may eat right from the display.

4.)  Summer:  I am very partial to summer, so a booth set up at any Robert Moses beach on the South Shore of Long Island, in July, with no crowds, would be spectacular. Extra booth points for a quilt, an umbrella, no hairy men in Speedo’s, and a full picnic basket.

3.)  NPR:  A booth featuring all of my favorite anchors and personalities from NPR would be okay. All of them reporting nothing but good news would be great. Tom and Ray fixing my husband’s worthless beater of a car . . . even better.

2.)  History Dinner Party:  Remember that game where you get to choose the 10 people you would want at a dinner party, and they could be alive or dead? A booth that could throw that dinner party, individualized for everyone who stops by, would be a booth folks would remember for a very long time.

Feel free to click on the comments link and add your own guarantee techniques to increase booth traffic.

Consider it a double dog “zombies vs. unicorns” dare.  Thanks Christine! 😉

This entry was posted on Tuesday, October 18th, 2011 at 11:57 pm and is filed under Fun, Mel White, Trade Show Exhibit Tips. You can follow any responses to this entry through the RSS 2.0 feed. You can leave a response, or trackback from your own site.