At least five times a day, I am asked by distributors:  “So what are you seeing in exhibit design? What are people buying?” I love when I am asked that question. It’s usually an indication that we’re all busy.

If you have been to Classic, then you know my office is above Accounting and next to Design. Everyday, I walk up and down those stairs 15-20 times. On my way to Customer Service or the Set-up area, I generally tour Production to see what is being built and shipping that day.

Without fail, I always see multiple iPad Stands, an iPad enclosure, or some creative way we are integrating an iPad or other tablet into an exhibit. From Islands to Table tops and everything in between. And while I see lots of standard “kits,” I also see lots of customized applications as well. 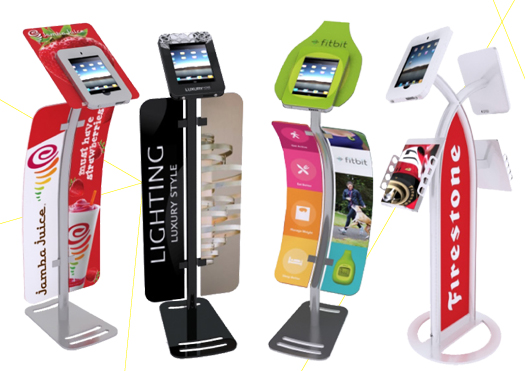 Classic Exhibits has devoted more than two years to designing a wide assortment of tablet solutions into exhibits of all shapes and sizes. We are clearly the leader. I say that not because I’m bragging, but because we have devoted enormous R&D, Design, and Marketing effort to achieve that position. The proof is in the pudding. Not a day goes by that we are not shipping 5-25 iPad kiosks or enclosures.

Design and innovation has certainly been the driver. From the get-go, we applied for Design and Utility patents because we wanted to protect not only our intellectual property, but also ensure that Classic Distributors had a unique competitive advantage in the marketplace. Those distributors who have embraced iPad Solutions and have marketed them consistently and aggressively are reaping the rewards of their efforts.

Aside from design, the other element that stands out is the “secret sauce,” such as our “Port\Land” Swivel Stop Technology. Whether you’re using an iPad or some other tablet unit, such as a Samsung Galaxy Tab or ASUS, this feature really sets the Classic products apart from those Johnny Come Lately knockoffs. All are clunky, heavy, and less functional, even those units that have “attempted” to copy the same design features.

It’s one thing to “copy” as opposed to “innovate.” Innovation requires a well thought out process that:  a). focuses on your customers, b). understands how they will use it, c). designs it to be attractive and functional, and d). engineers it to be durable and lightweight. Copying does none of that. 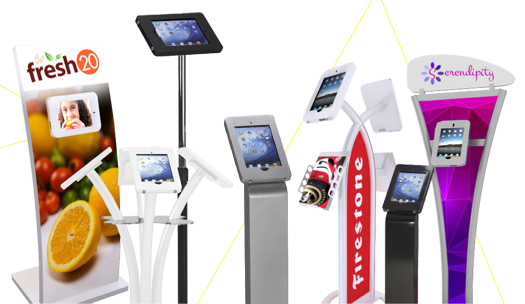 I digress. Whether you are building a dynamic island design or just a freestanding interactive kiosk, please keep our iPad Solutions in mind. They are an affordable and a practical accessory to any exhibit.

Thank you for your continued support of Classic Exhibits. We welcome your design and R&D suggestions.

Hope you have a great weekend with your families. Talk to you next week.

This fall, Classic Exhibits and Eco-Systems Sustainable Exhibits pulled out all the stops. You’ll discover some of our most exciting exhibit designs at special prices. Click on any display in the Specials Gallery to see the details.

#1 Our Biggest Savings Ever on Quadro EO Pop Up Displays

All Quadro EO Pop Up Display are on sale through October 31.  The Quadro EO Self-locking Pop Up has been a favorite of distributors for five years, and now we’ve make it even more irresistible. Whether you order the frame with fabric end caps, with fabric panels, or with graphic panels, they are all on sale for the next 60 days.

#2 Get Port\Land iPad Kiosk Cases at a Promotional Price

The innovative Port\Land iPad Kiosks are already a hit with your customers. Make sure to include the portable case with wheels on the order. The TF-701 cases are discounted from $199 to $165. The rolling case includes the die-cut foam and reusable jigging you’ve come to expect from Classic Exhibits.

This is a first! eSmart Displays have never been sale before. And not just any designs, it’s 10 of the most popular inlines. If you have not spent time in the eSmart Gallery before, you’re missing a lot. Cool designs at competitive prices. Not to mention so GREEN that Kermit would be jealous.

There’s no sexier table top than the Aero Portable. It’s got all the curves, vivid tension fabric graphics, and portable assembly. For anyone wanting to make a visual impact with a “no tools” table top, the Aero Series is the #1 choice. Choose from six of our most popular designs.

This special blows the doors off any previous Sacagawea promotion. Not only are ALL Sacagawea Hybrids on sale, but we’re including a FREE Cell Phone or Tablet Charging Station on those kits with workstations. You have to see this to believe it. You already know that Sacagawea is the VERY BEST AFFORDABLE Hybrid . . . Now it’s even better! Choose from 54 inline kits.

To view all the Specials, go to the Specials Gallery in Exhibit Design Search. Give us a call if you have any questions.

Save $50 on iPad Kiosk designs MOD-1312/1314 through July 30. The MOD-1312/1314 features a convenient clamshell frame with two anti-theft locks. The kiosks have integrated wire management with a 4 outlet power strip.

Choose from multiple graphic solutions including face plates, halos, wings, and direct prints on the post. 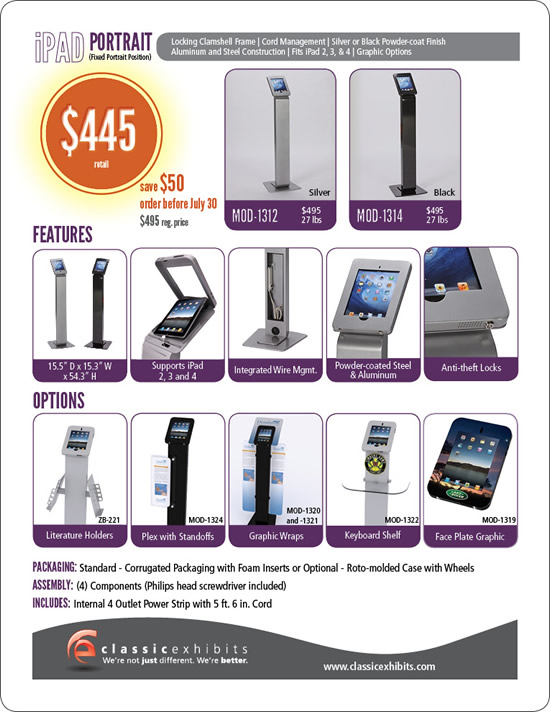 Giving Credit Where Credit is Due: Word on the Street — April 15th thru April 19th
April 21st, 2013 Mel White COMMENTS

After nearly 19 years in this industry, I have had my fair share of gripes with how General Service Contractors and Show Management manage trade shows. And I have certainly voiced those gripes, hopefully, in a respectful manner.

Well, this past week I was in Chicago for GlobalShop 2013 at McCormick Place as both an exhibitor and an attendee. Freeman was the General Service Contractor for the event. And all I can say is — KUDOS from start to finish. It’s not like everything went without a hitch, but where there were bumps in the road, there was someone right there to help you.

I must say, honestly, I was not expecting that, even with the “kinder, gentler, exhibitor friendly” rules at McCormick. For example, we had an inline, and the new rules state that you can set your entire booth by yourself as long as you have all your own tools. I was expecting some resentful union folk roaming the floor. Not the case at all!

I don’t mean this to be sarcastic, but it was a little weird not looking over my shoulder every five seconds to see if a foreman was making my size 13 concrete shoes.

Then there was Janet Ruddy, an Exhibitor Service Clerk from Freeman’s Chicago office. I was fortunate to get her on the phone a week before the show to handle some changes. Let’s just say that there is a place for you in the Customer Service Hall of Fame Janet. Thanks!

Neilson was the producer (show management) of the show. They did an OK job as well. But, sad to say, the number of “suitcasers” allowed on the show floor day one and two was horrendous. Thankfully, the show was so freaking great that it outweighed that one very big negative.

Classic Exhibits was at GlobalShop as both an exhibitor and an attendee. As an exhibitor in a 10 x 20 space, we showcased many of the retail solutions we’ve designed and built over the past two years. That was fun, and the response was great! The ClassicMODUL aluminum profiles really shined as a retail solution! Our capabilities were highlighted in a series of backwall light boxes and an adjustable merchandising grid we’ve perfected (and sold multiple times).

I would be remiss if I did not give credit to our innovative iPad Kiosks. It’s as if they were covered in $100 bills. They drew attendee after attendee into the booth, who then stayed to hear about Classic Exhibits (which was similar to our experience at EXHIBITOR).

A special thanks to Chuck Michel and Tom Beard who joined me. Both have rich histories with the GlobalShop community and really helped me (as a rookie) understand the market and the show better. Not to mention they were great friends to hang with for three days. Thanks for everything gents.

Here are a couple of takeaways, although there were many from the week. Just like the Tradeshow World, the Retail World is alive with technology, especially interactive solutions. There is clearly a push for captivating technology in the retail experience. And large, very large, fabric graphics with engineered extrusions as the structure. That’s music to our ears and re-enforces what we have been seeing in the Classic Exhibits and ClassicMODUL divisions.

Here are some pics of the week’s events. Hope you enjoy. If you were at GlobalShop, please share your impressions in the comment section. I’d love to hear what you thought (and so would other Classic Distributors).

Hope you all have a great week ahead. Give me a call if you would like to talk more about GlobalShop.

Rate the iPad Kiosks in this Pageant?

Below are many of the basic iPad Kiosk shapes (without graphic face plates, halos, and wings to influence your decision). Think of it as the swimsuit competition.

All competitors scored 10’s in the talent portion. MOD-1333 was voted Miss Congeniality.

Vote 1-5 stars for each kiosk. Refresh your browser to see the updated results.