Erica Dougherty, an Account Executive at Exhibits Northwest Seattle, connects with her clients because she takes the time to get to know them and their business. That extends to feedback after a show, which is invaluable.

According to Erica, “My client, Darryl at DF/Net Research, is wonderful about sending feedback and kudos to me/us. He has allow me to share his success stories which may be beneficial to other Classic Distributors. Below are two emails from two shows, along with photos.” 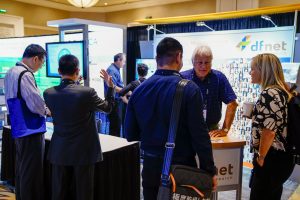 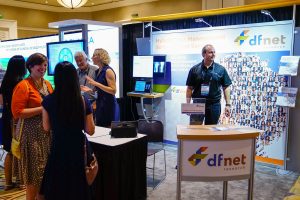 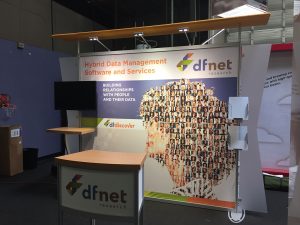 Looking forward to it. As you know this was our first trade show – the Society of Clinical Data Managers in Orlando. We didn’t really know what to expect, and wondered if it would be worth it. Was it? Absolutely.

The new VP of Global Clinical Operations from a long time software client (10 years) came to that conference by himself unknown to his staff. He was shopping for new data management software to replace our system. In fact, he had gone 6 months down a path with a large global competitor – a competitor with > $1B in revenue.

He stopped by our booth for a demo and a chat. I gave him a 30 minute demo, and we took him to dinner. He was really excited about our current software – his company was using a version that was about 7 years behind. We talked about modernization, moving their company forward, and having DF/Net take a larger role with his company to provide services and software. And talked about how much sense it made to stay with the modern version of our software rather than switch to an unknown.

Long story short we just signed a contract for services worth $800K over 13 months. And they are continuing their $100K/year software license. They have studies through 2028, so we can think long term on both services and software.

The take-home message? Did we get new clients? Yet to be determined. Did we get new business? Yes. And the most important thing we learned was that your current clients attend trade shows routinely. There are many shiny happy people there trying to take your business away. If we had not gone, I’m sure that at some point in the next  year or two they would simply have told us they were not renewing their software license.

We also learned that you can have a booth that competes with the $1B companies. But regardless, it’s the people at the booth that make the difference. Just be yourself. I was amazed how many competitors hire “show people” that look good, but don’t know anything. The booth is your chance to make decision makers make a decision right on the spot.

Oh, and the $1B competitor? We got a call from them saying that they had a major client looking to use our software, but they had zero inhouse expertise. Would we be willing to partner with them and subcontract the work? No, we were not.

That’s our success story. Thanks for all of the great help on the booth! 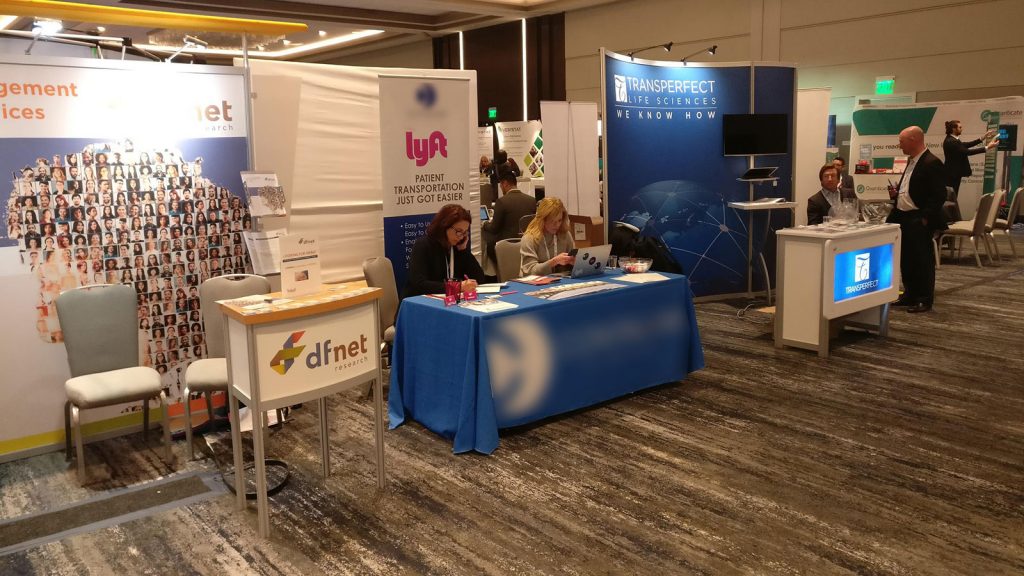 We just had another trade show in San Francisco last month – I wanted to share that your lunch and learn tips were helpful. In particular, don’t eat at the booth, don’t check your phone or email, and always look engaged.

I’ve attached a photo taken of the booth next to us. Problem #1 was that 2/3rds of their booth didn’t show up. But even then they spent the entire time sitting behind their desk looking down at their computer and/or phone. During lunch when the most prospects were walking the floor, they were busy munching on their food. With my new awareness I noted that no one approached during the busiest time of the day. Hope they enjoyed their $12,500 lunch….

I think we had about 5x the foot traffic and interactions than they did.

We also had continued success with our charity cards, I think I may have mentioned these before:

Jim acted as the “speedbump” with the cards to engage passers. A charity card has a better story (and one that takes more than 1 second to explain) than perhaps a water bottle or USB stick.

Thanks again for the tips. It’s an ongoing learning experience.

Please let Erica know if you found these helpful (erica@exhibitsnw.com). She would love to hear stories and feedback from your clients as well.

This entry was posted on Friday, April 13th, 2018 at 8:08 am and is filed under Classic Exhibit Systems, Erica Dougherty, Exhibits Northwest, Mel White. You can follow any responses to this entry through the RSS 2.0 feed. You can leave a response, or trackback from your own site.