Last week, I was in Seattle for a management meeting at the Exhibits Northwest office. On the drive up, Mel shared an article with me from the magazine Mental Floss. Mel knows I’m a big fan of the movie The Big Lebowski, a Coen Brothers flick. The Big Lebowski (TBL) was featured in an article entitled, “The 25 Most Powerful Movies of the Past 25 Years.”

The article cited TBL as “The Movie that Went from Cult to Religion.” Since I suspect you haven’t heard of this religion, known as The Church of the Latter-Day Dude or Dudeism, I’ll provide some background information. Dudeism is based on Jeff Bridges’ role as Jeffrey Lebowski aka “The Dude.” If you haven’t seen the film, he’s an easygoing guy who goes bowling with his friends, Walter and Donny, and enjoys a good White Russian cocktail (or a Caucasian as he calls it). While his taste in decorating leaves something to be desired as well as his taste in clothing, he does have a rug that “ties the room together” and when the rug is desecrated due to a misunderstanding, he recruits Walter and Donny to help him seek restitution.

For those of you who have not seen it, I urge you to rent the movie. It’s worth the every minute of the 117 minute run time, and the movie has an uncanny number of quotable quotes (which I’d share if they didn’t all contain the “F” word).

But back to the article . . . It would appear that the movie inspired the religion Dudeism. Funny, but very real. And you can actually become ordained as a Dudeist priest online. With it comes great responsibility and abilities, such as presiding over weddings, funerals, or any other kind of celebration.

However, such authority does not come easy. You actually have to fill in three fields online! 🙂 After taking those rigorous steps, you are granted the sacred privilege of becoming an Ordained Dudeist Priest.

So you guessed it (and all from my Blackberry no less), I became a Dudeist Priest in The Church of the Latter-Day Dude somewhere on I-5 between Olympia and Tacoma And that was the easy part. Now I need to study and learn the ways of Dudeism. Fortunately I already own a ratty bathrobe which will serve nicely as my vestments.

To begin my spiritual journey, I started with the Tao of the Dude: Awesome Insights from Deep Dudes, which included such inspiration as “Just Take it Easy Man,” “This Aggression will Not Stand,” or my favorite “Careful, Man, There is a Beverage Here.”

And as a newbie to the Dudeist church, I certainly wanted to check out the elders of the movement, like elder greats Jeff Spicoli, Snoopy, Quincy Jones, Jerry Garcia and Walt Whitman. My pride of being part of such a community is hard to put to words.

So, I hope your weekend was good. Mine has been filled with historical Dude Studies and the reading of the Dude de Ching, The Dudiest Holy Book.

Take it easy man and enjoy a Caucasian with a fellow dude. 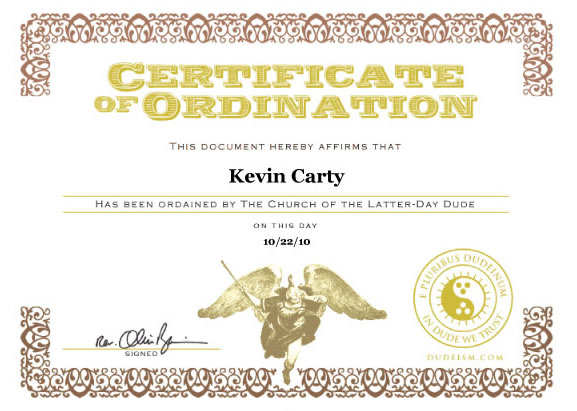