Celebrating Grandma: Word on the Street — May 27th thru May 31st

This weekend, the Carty Family celebrates my grandmother’s 95th birthday. I come from a huge Irish Catholic family, meaning we’ll have 40-50 in attendance at her party. She has chosen an ice cream social, and it’s sure to be a great event.  She is an amazing woman!

Her birthday got me thinking . . . 95 years. What she has seen and experienced over the past century — good and bad? Her life began at the end of  World War I. There was Prohibition, segregation, the Depression, the Vietnam War protests, the Great Recession, and the election of Barack Obama.

1929 — The Historic Boardwalk Convention Hall in Atlantic City opened. Since its opening, the convention hall has been host to a variety of events, ranging from the 1964 Democratic National Convention to the Holyfield and Foreman fight in 1991.

1933 — Held to commemorate the one-hundredth anniversary of the city’s incorporation and the fortieth anniversary of Chicago’s first world’s fair, the Century of Progress Exposition ran from May until November of 1933. In the end, a total of 22.3 million people visited the 1933 Trade Fair. 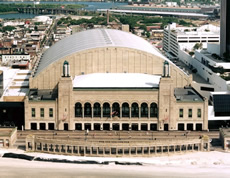 1960 — The first McCormick Place was opened in Chicago. It was destroyed in 1967 by a fire. The main floor had no sprinklers.

1967 — The first CES Show. CES, or Consumer Electronics Show, began in June 1967 as a spinoff of the Chicago Music Show, which, at the time, was the only place to debut consumer electronics. The first CES drew in 17,500 attendees and over 100 exhibitors.

1984 — The Louisiana World Exposition opened its doors in New Orleans, La. The expo’s theme was “The World of Rivers – Fresh Waters as a Source of Life.”

1995 — Thousands of Grateful Dead fans congregated in Chicago’s McCormick Place 31st street parking lot. It was days before the show, however that did not prevent them from camping out. Many of the “deadheads” were witnessed dancing, singing, cooking, and showering in the parking lot. Eww!

1999 — The Outdoor Retailer Summer Market Show’s pavilion structures literally flew away in September of ’99 when, in an act of God, a tornado came twisting through downtown Salt Lake City sucking up and spitting out everything in its path. Unfortunately that included the booths of over 330 exhibitors; however, camaraderie prevailed in the hearts of attendees as companies made room for the displaced in their own booths contained in the main hall. The show must go on!

2007 — Exhibit City News, the nation’s only tradeshow newspaper, launched the inaugural edition of its sister publication Tradeshow Lifestyles to the world; the newspaper highlighted travel hotspots, such as dining, lodging, and entertainment which would be of interest to the tradeshow community.

Thanks to Exhibit City News for these dates. There are so many more that I could spend a week writing about them all.

Suffice to say, our industry has lead the way for businesses of all kinds over the past 95 years, giving them an avenue and venue to show off their wares and talents.

Special thanks to Iris Carty for being a great grandma. She has seen a lot but shared even more with me and the rest of us whacky folks in the Carty Clan. Here’s to seeing 100 in five years Grandma.  🙂

Hope you all had a great weekend. I know I did!

This entry was posted on Sunday, June 2nd, 2013 at 5:18 pm and is filed under Kevin Carty, Word on the Street. You can follow any responses to this entry through the RSS 2.0 feed. You can leave a response, or trackback from your own site.

3 Responses to “Celebrating Grandma: Word on the Street — May 27th thru May 31st”