Delight and Surprise: Word on the Street — July 16th thru July 20th

Over Promise and Under Deliver

We all know the danger of “over-promising and under delivering.” In business, there are few errors that can be more damaging, particularly when trying to attract new customers or launching a new product to existing customers. Then there’s the flip side of “under promising and over delivering” which has its own risks.

Over hyping a program or product can kill it if the deliverables don’t match the pre-hype. That’s not to say that promoting a new product or service is not critical. It clearly is! But at a minimum, there needs to be as  much effort in the “frosting,” i.e., the experience of receiving the product or service. I would argue that the “end experience” is the most critical experience.

Let’s look at something near and dear to me — Apple. I’ll admit it. I’ve drunk the Kool-aid and have been an Apple Fan Club member since May 2010. For years I fought it, accusing Apple of being just a marketing machine. Nothing more. Something the “cool kids” had to have to be “ccol” for those who bought into the Apple hype.

I Took the Bait

When i received my Macbook Pro in the mail, I took it home, opened it, and begin the set-up process. That’s where the “delight and surprise” began. Mind you, I already was a “win” for the Apple marketing machine. I bought the laptop. Victory for them right? Yes and No, but I would argue Not Yet. The “Yes” came next. 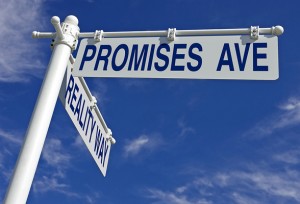 When I tore the packing tape off the plain brown corrugated shipping box and peered inside, the packaging was amazing. Well thought out, clean, everything had a place and was in its place. It was COOL. But again, the victory, while building, was not quite complete.

After removing the Macbook Pro from the box, the real victory materialized. I plugged in my shinny new laptop via a magnetic plug. What a great concept, especially for someone with two five year olds racing around who trip over things like cords. The cord wouldn’t get damaged (or do any damage to a five year old). Genius.

Them I hit the power button. Being a PC user for the prior 16 years, I was prepared for an agonizing 4-6 hours of set up and install. But something very strange happened. My Macbook Pro began to set itself up — literally! It was the definition of “intuitive.” By the time I was done, I looked at the clock and realized that it had only taken (1) hour from start to finish, migration time for email included

Back to my point. Here was a marketing machine that not only exceeded expectations, but “Surprised and Delighted” this new user!

There are millions of great products and services. We all yearn to design, sell, or own them. But, and this is the important “but,” there are far fewer with great user experiences. For example, who wants to buy a beautiful 20 x 30 island like the one featured in Design Monday this week and then receive a box of metal with some unintelligible set-up instructions. Nothing will spoil the buying process more. After all, your client just spent thousands of dollars on the booth space, the exhibit, and all the show services. They expect a perfect exhibit and a positive exhibit experience, as they should. But we need to surprise them as well and leave a lasting impression. At Classic, we hope we do just that, which is why we are always asking you in phone calls, in Customer Feedback emails, and in this blog, “Was your customer ‘Surprised and Delighted?'”

How do you accomplish that in your business? How do you make the “End Experience” as delightful as everything that precedes it? What’s the “frosting” that turns a mere cake into a party? Please share your secret with the other Classic Exhibits community.

STARTING TODAY, let’s change the tired “Over Promise, Under Promise” cliches into something more meaningful — “Make a Promise and Over Deliver!” True, it’s not as catchy, but it’s a real goal with real outcomes.

This entry was posted on Sunday, July 22nd, 2012 at 1:27 am and is filed under Kevin Carty, Word on the Street. You can follow any responses to this entry through the RSS 2.0 feed. You can leave a response, or trackback from your own site.