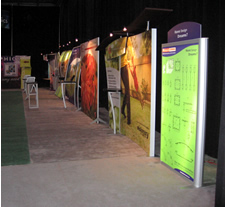 I attended a Distributor Open House recently, where the distributor invited customers to see the latest trends in trade show marketing (ExhibiTrends 2011). Over 20 exhibit-related companies participated, ranging from portable manufacturers to lead-generating companies, and from flooring suppliers to graphic providers. The event was well-organized and extremely successful.  About 300 current and potential customers walked the event.

I don’t know how many of your are planning to attend EXHIBITOR, but I thought I’d pass along my observations from the Open House since I expect (and hope) they echo what we’ll see in Las Vegas in about three weeks.

I spoke with about 90 end-users that day. For the most part, these folks had portable/modular displays and were considering newer options.

Toward the end of the event, I walked the floor to see the other exhibits. I saw one pop-up, and it was for a lighting company. Not one display manufacturer was showing a true pop up. Optima Graphics had an Xpression, but I’m not counting that as a traditional pop up. Everything else was a hybrid, a modular, or a tube structure with pillowcase graphics. I’ll be curious, and I invite you to do the same, to count how many pop up displays are shown at EXHIBITOR.

Don’t misinterpret me. I’m not predicting the demise of the pop up. Goodness knows, we sell LOTS and LOTS of Quadro EO and Quadro S kits. However, we may be witnessing a tipping point in conjunction with the end of the recession. Customers who have deferred purchases for two to three years are back in the market. They are willing to spend money, however cautiously. When they purchase, they want something different. Something with most of the benefits of a pop up display, but without the ho-hum, been-there, done-that look. If those end-users are a guide to what we can expect to see at EXHIBITOR, then expect to see lots of interest in portable and modular hybrids, especially those that do more than simply mimic the look of a pop up.

Best of luck to everyone at EXHIBITOR. Please visit us at booth #1455. We’ll show you our latest island configurations, rental designs, Eco-systems Sustainable Displays, and, of course, the best portable and modular hybrids in the industry.