Well, a couple weeks have passed since I posted. I think Mel thought I had given up on the blog, but the reality is the 4th of July, a couple vacation days (if you call working a charity poker tournament in Detroit vacation), and TS2, and you are into late July.

Not much happened in late June and early July so I will catch up very quickly.

One interesting business tidbit has been the resurgence of island opportunities in the dead of summer. It is hard to fathom, but we have quoted more 20×20’s and larger islands in the past 6 or 7 weeks than we did in the past calendar year (That may be an overstatement, but not by much). In fact, we have closed several larger projects this summer, and as someone with almost 25 years of history in this industry, I can tell you that this is very out of character.

On to the BIG NEWS! LeBron James has signed with Miami. The Heat are fortunate to have him. I LOVE ESPN, but the charade they put on over his “announcement” was too much for even the most avid fan. If you couldn’t tell when he took his jersey off on the way to the locker room during the playoffs that he was leaving Cleveland, then you had your head in the sand.

Here is my real problem with the situation (not that anybody cares about my opinion or LeBron James), but the guy has never won. He has an ego that makes Texas look small. Those who paved the way for his multimillion dollar contract (Bird, Magic, Isiah, Kareem, Doctor J, David Robinson . . . the list can go on and on) all have something in common. They won championships. They put their team on their back and WILLED them to win. They were at their absolute best when their back was against the wall, and it was do or die. Bird won championships with back spasms so bad he couldn’t walk, but he could play. Michael scored 30+ points in Salt Lake City with a 104 fever and throwing up prior to the game. Isiah was able to score 25 points in the 4th quarter of a game 7 with a broken ankle. Kareem played through severe migraines to help his team win a championship. They all had something in common:  INCREDIBLE MENTAL TOUGHNESS. LeBron, at this point, you have the mental toughness of a marshmallow. OK . . . my rant is over. 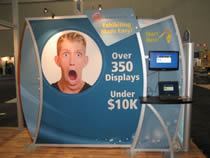 Last week was TS2. Kevin has already done a great job of evaluating the show on his blog. The venue (Boston Convention Center) was friendly for an exhibitor. It was attached to the Westin and a reasonable walk, unlike at Mandalay Bay or LVCC or Orange County where you can walk a mile and a half just to get to the hall entrance. The show was small. There were not a lot of exhibitors, and even fewer attendees. However, we got over 50 leads, so the results are not bad. Sometimes it pays to be a big fish in a small pond. Tell me where we could gather 50 solid leads in the dead of summer anywhere? Many people had never seen our portable hybrids like Sacagewea or Magellan and were pleasantly surprised to find so many portable solutions for less than 10K.

We were also able to see several of our distributors. Thanks to Mike’s Pastry I have a new love for cannoli like never before. Mmmmmmmmmmm!

Now back in the office and hoping for the fall sales to start any day now.

This entry was posted on Wednesday, July 21st, 2010 at 3:30 pm and is filed under Reid Sherwood, Shooting from the Hip. You can follow any responses to this entry through the RSS 2.0 feed. You can leave a response, or trackback from your own site.