Online Trade Shows — a.k.a. Being Left Out in the Virtual Cold!

Today my landlord walked into my office and handed me a brochure and asked if I’d ever seen anything like this before? As I looked at the brochure which described a virtual trade show called Expo 3.0 “The Receivables Trade Show,”  sponsored by InsideARM.com. I’d heard about virtual trade shows and the general concept, but have never been curious enough to really research it to see what the lure was for such an edgy concept.

After doing a quick Google search, I quickly learned that there were a few big players spending big bucks, such as Ziff Davis Enterprise, who I figured must know something that I didn’t or why would they be so involved. So I continued to search and contemplate what I was seeing.

With the domination of electronics at every level of our society, it comes as no surprise that somebody had to make the effort to see if virtual trade shows would work — at some level! But does it really stand a chance? Well, at least some of the evidence certainly suggests that it might, so consider this:

The virtual show brochure that my landlord gave me spoke about webinars being the ideal way to woo potential clients to your products and then explained how the interaction would work with the attendees and the exhibitors. They referred to communicating with exhibitors by sending emails and notes which is another way of saying “Chat.” That’s when the red flag went up the flag pole! CHAT? I don’t know about you, but if you’ve ever chatted with a potential client online, that’s called taking 30 minutes to consummate 1 minute of conversation in one of the most painful exercises ever invented by man, and not very productive either. To a type A salesperson, it’s like talking in slow motion with all the visual and audio clues being left out. You never have the opportunity to know if there is something being left out of the conversation because the “chatter” can disconnect from the “chattee” anytime he or she wants to. But wait, there’s a bonus; the brochure suggested doing a group chat! That’s nothing but wasting your time and sales in multiples. 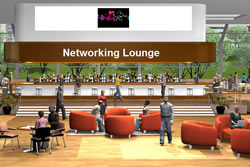 Now consider this. The trade show floor is a dynamic, vibrant, and ever changing series of events, products, and especially relationships. Quite often it’s not what you see that is affecting change or creating a future sale, but it’s the dynamics that you don’t see that’s making the biggest difference. Here are a few examples:

I presently run two online web sites that sell trade show exhibits so I feel I have some experience in selling in this environment, never having had the luxury of meeting my clients face to face. Everything we communicate is by email and on the phone. When you’re competing against perhaps a half dozen other companies all selling the same thing, it becomes very difficult to differentiate yourself. For me, basic sales skills and product knowledge, and an enthusiasm for what I do has served me well. Selling face-to-face is light years easier in every respect, which is why I would say that with some products, perhaps a virtual trade show might be feasible, but for right now, I don’t think trade show marketing is going to be threatened anytime in the near future.

This entry was posted on Monday, January 4th, 2010 at 2:22 pm and is filed under Uncategorized. You can follow any responses to this entry through the RSS 2.0 feed. You can leave a response, or trackback from your own site.

One Response to “Online Trade Shows — a.k.a. Being Left Out in the Virtual Cold!”