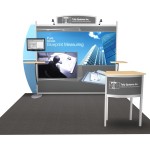 I’m just old enough to remember the skits where an actor would portray both a man and a woman by painting half their face as a man and the other half as a woman. Depending on the dialogue, the actor would show the audience one side or the other and often would wear a half suit and half dress costume. It seems silly now, but I’m smiling as I write this because the skits were entertaining, creative, and economical (one actor – two roles).

As budgets tighten, particularly exhibit budgets, exhibit managers expect displays to perform multiple roles. Unfortunately, most exhibits are much better as character actors – portable or modular or custom but not custom portable (for example).

If you are familiar with Classic, you already know about Perfect 10 and Magellan, two innovative hybrid systems in the $5,000 to $12,000 price range. You clearly like these hybrid displays, judging by our sales over the past 18 months. Recently, you asked for an even more economical solution, something starting around $3100.

For too long, trade show exhibit buyers have had to choose between price and design and portability and upscale features. Not anymore. The Sacagawea Portable Hybrid Series offers exhibitors contemporary hybrid design with aluminum extrusion and large format tension fabric graphics at a great price.

If you are considering a pop up display, why not consider a Sacagawea instead for about the same price? The Sacagawea display takes about the same time to assemble, packs in portable roto-molded case(s) with wheels, and offers more flexibility with counters, workstations, and re-configurability. With Sacagawea, you can start with a 10’ x 10’ exhibit and expand to a 10’ x 20’ as your show schedule and budget grows. Because the system is constructed with durable aluminum extrusion and lightweight tension fabric graphics, your display will evolve as your trade show marketing program changes from year to year. 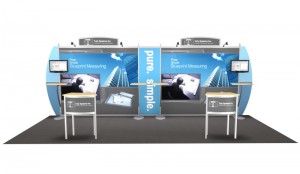 First of all I wanted to thank everyone who submitted entries describing “Interconnectivity.” All were very pertinent and well thought out.

Secondly, I want to announce the two winners who will receive a full conference pass to TS2 in Chicago:

Congratulations to you both! I look forward to seeing you at TS2.

As a reminder to the rest of you, TS2 is happening July 20 – 23 at McCormick Place in Chicago, Illinois.

Please stop by and visit the Classic Exhibits crew at booth #601 (right at the entrance).

If you are like me, you find yourself talking to your exhibit industry peers to see “what’s up” in their world and in our industry. So, at the recommendation of others, I am going to write about what I am hearing each week and post it every Friday by noon. I look forward to your comments and feedback.

Budgets Looking Up Heading into 2010!

That was the title of an article an industry friend sent my direction on Monday, and it really set the tone for the week.

In our business, we have seen a big spike in activity in design and quote requests so I thought i would make some calls and see if this was true for others. I spoke to some traditional Portable/Modular/Hybrid Distributors, Custom Houses, and a few suppliers of carpeting, lighting, and transportation services.

Their response confirmed our trend. With the exception of two companies, which said they are still hearing crickets rather than phones ringing, everyone else said that business has begun to pickup over the past two weeks. In addition, the projects seem real and have some meat. Not just “pie in the sky” speculative projects.

Everyone, myself included, is careful to mention that there has NOT been a comparable spike in sales, just in design and quoting. Which tells me that some money is being freed up for later summer and fall shows. The sales they are seeing right now are for refreshed graphics for existing exhibits and/or alternative “value” based exhibit options. At Classic, for example, we just introduced the Sacagawea Hybrid Series which has seen a lot of activity.

The other really consistent fact that all companies I spoke to confirmed was that their rental business is up anywhere from 25-50% over last year. Stands to reason right?!?!

They all agreed that May, June, and July will be spent getting back to basics. Making calls to as many people as possible. Keeping your company’s name out in the forefront is paramount during uncertain economic times like these. And for those who survive . . . the last thing you want to struggle with down the road is name recognition.

As I muddle and learn my way through this weekly blog thing, I encourage you to send me topics or questions that you would like feedback on. I would be happy to ask around as I make my calls each day and/or as I visit customers.

Talk to you all soon

The trade show floor can be like operating in a foreign country. However, if you follow a few basic tips, you can successfully and economically navigate the Installation and Dismantle waters of your next show.

END_OF_DOCUMENT_TOKEN_TO_BE_REPLACED

Are you a current or former manager in a retail business? Do you work in a clothing, shoe, or discount store? Are you managing an electronics, jewelry, or specialty shop? Stand proud. Chances are you don’t get much respect, but you should. Yes, you have a thankless job with terrible hours, mediocre benefits, and a paycheck that barely covers rent, utilities, and the Value Meal Deal. But you work hard. You motivate and train other employees to excel. You are nice, even when others are not nice. You are responsible — day after day, sale after sale, policy change after policy change.

For All Those Reasons and More I Respect You. Here’s Why.

For seven years, I worked as a sales and training manager in a department store. I was young, not teenager young, but late 20’s early 30’s young. I had a college degree (in English), but no real management or customer service experience. I had worked in a bank in the IT Department and in a sub shop, and taught for awhile, but, frankly, I was drifting. I didn’t really have a career in mind. Then one day I was offered a sales manager job at a large department store. It was kind of a fluke actually, but I needed a job and I took it. I’m glad I did. I can’t image doing what I do now without that background, without that training, and without that guidance from thousands of employees, managers, and customers over those seven years. So, here’s my take on why retail managers should get more respect.